Jewelry, as well as books, furniture and decorative accessories, are part of the material heritage and reflect the spirit of an era. 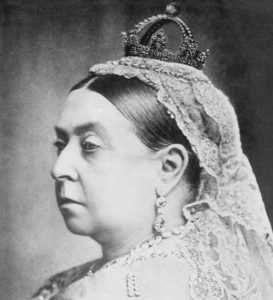 While they have always fascinated people and helped shape history, it was especially in the Victorian era that they became more popular.
In 1837, Queen Victoria inaugurated what would be the longest reign in British history. For 64 years, from 1837 to 1901, it symbolized the expansion and triumph of the British Empire. This empress of the Indies, Queen of Great Britain and Ireland, whom the people will see at first young woman and whom it will then follow until its very old age, is “haughty, passionate about pretty things, extremely cultivated about all the styles of time. She influences the way of life, among others by her taste and her immense love of jewels.

The specialists divide Victoria’s reign into three periods of about twenty years each. The first (1840-1860) is characterized by fine quality reproductions of jewelery recalling the Gothic and Renaissance styles. The second (1869-1880) is famous for ostentatious pieces set with pearls and diamonds from South Africa. It must also be known that the wealthy Englishmen, from 1850, had brought back jewelery from India and Japan, objects of which the British jewelers were largely inspired … Finally, gradually, from 1880 until 1900 (the third and last period), the heavy jewels are replaced by smaller pieces. We then see the appearance of jewelry mass money and even those fancy become so common thereafter.

Turquoise is the favorite stone of the queen. At the time of her marriage, in 1840, with Albert de Saxe-Coburg-Gotha, her beloved German cousin, she offered as a gift to each of her ladies a ring with her hand-painted portrait, surrounded by turquoises carved in white. cabochon.
A few years ago, Sir Walter Scott wrote a short story that slows the demand for opal jewelry. He portrays this variety of silica as a source of bad luck if it is not the birthstone. To help Australia, a British colony, revive the trade in this stone, Queen Victoria does not hesitate to donate jewelry of this material to her friends and family during her coronation. She renews the experience on the occasion of the engagement of her daughters.

When Prince Albert died in 1861, Queen Victoria, a widow of 42 years, was in full mourning. In his example, black (through jet, onyx and marcasite) and white (wearing diamonds and pearls symbolizing tears) become widespread. The romantic current in France, represented among others by Alphonse de Lamartine and François René de Chateaubriand in literature, Eugène Delacroix in painting and Hector Berlioz in music, exalts the personal expression, which stimulates the creation of sentimental jewelry (sentimental jewelry).

This influence is felt everywhere. Thus, a gem of mourning is especially prized in England: women, at the death of a person who is dear to them, carry in memory a brooch, often formed in front of a forget-me-not (the English name choice forget me not), around roses, Queen Victoria’s favorite flower, and behind the artistically crisscrossed hair of the loved one and the survivor.

We particularly like this fashion and in France, women even sell some of their hair so that it is braided and worked to make jewelry. One of the small trades of the time is also the hair weaver in hand …
What were the most common motifs in the composition of Victorian jewelry? Buckles, snakes, swans, hearts, hands, angels, monograms, stars, croissants, four-leaf clover, crown, cross, effigy of a ruler.

As for the metals used, in the mid-1800s, the “day” jewels were silver and the “evening” gold of Australia or Klondike (another colony), pink gold so dear to collectors , white or yellow gold, 9 to 22 carats.

The other stones or materials most in demand during the reign of Victoria were amber, coral, garnet, emerald, ruby, sapphire, peridot, cameos in Vesuvius and shell, glass and even tortoiseshell, the latter is so bad that the endangered species had to be protected!

Remember that electroplating, a process consisting of covering a metal base with silver or gold, already existed in 1844, which opened the door to the production of cheaper products. If jewels were first the prerogative of kings and aristocracy, they became quickly accessible to the bourgeoisie, eventually seducing the entire population.

In Quebec, on the other hand, the jewels were almost non-existent before 1850. Then, they were imported either from England, with jewels of 9, 12 or 15 carats, or of France (18 carats) or even of the United States (14 carats).

For the West, it is mainly thanks to Great Britain, cradle and foundation of the Victorian era, that the jewels have acquired their fame. Thanks to their Queen, Her Majesty’s subjects have long been able to boast of the fact that their country was the major center of manufacture of the most beautiful pieces representing the apogee of the political, cultural and economic power of the Empire.

It is undeniable that we have a weakness for the Victorian jewel, the invoice so refined and sophisticated, bill that manifests itself in the smallest elements of everyday life (fashion, furniture, architecture, etc.). The craze is so strong, that this type of jewel is copied from all over the world: up to its defects of execution that are reproduced! It is impossible to guess “the imposture” and to know if a jewel is of origin or not without having recourse to an expert.

But soon, it is an acceleration of industrialization; electric lighting replaces oil lamps; the Universal Exhibition of Paris is announced for 1900; the artists, true precursors and visionaries, are moving towards the Art Nouveau style in France and the Arts and Crafts movement in England. Before long (in 1901), Edward VII will succeed Victoria, in Great Britain. It is a wind of change that sweeps the entire Western world.